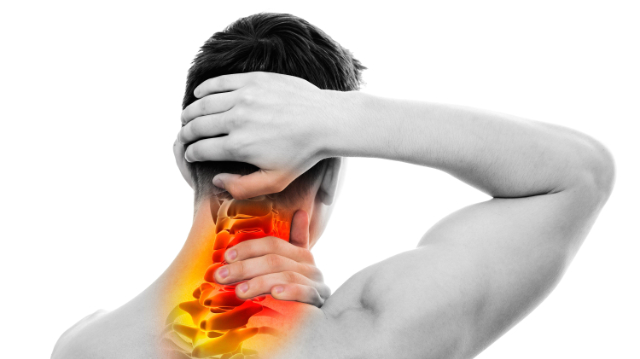 The spine is made up of 24 bones called vertebrae that are stacked on top of one another. Together, these bones connect to create a canal that protects the spinal cord from damage. The uppermost portion of the spine that begins at the base of the skull is called the cervical spine. It contains nerves that carry messages between the brain and muscles in the shoulders, arms, and hands. This is achieved through nerve roots that travel through the spinal canal and branch out through openings in the vertebrae called foramen.

Cervical radiculopathy, which is also referred to as a pinched nerve, occurs when one of these nerve roots is compressed or pinched when it branches away from the spinal cord. This is caused by any condition that injures or irritates one or more nerves in the cervical region of the spine, including a herniated disc, spinal stenosis, or degenerative disc disease. In most cases, patients with cervical radiculopathy experience a burning pain that starts in the neck and travels down the arm. This pain can get worse from turning or straining the neck. Other symptoms include tingling, as well as weakness or loss of sensation in the shoulders, arms, or hands.

Some patients with cervical radiculopathy will get better on their own over time, while others will continue to experience symptoms for extended periods. For patients that fail to improve, conservative treatments—particularly physical therapy—are typically recommended as the first step. A standard physical therapy program for cervical radiculopathy will include a variety of stretching and strengthening exercises, as well as a manual therapy component.


Manual therapy involves numerous hands–on mobilization and manipulation techniques that are intended to alleviate pain and improve mobility and function. Although studies have shown that manipulation and mobilization of the cervical spine is effective for improving pain and function in cervical radiculopathy, research is lacking on the effects of these interventions on sensory features. Therefore, a study was conducted to evaluate the effectiveness cervical mobilization for patients with cervical radiculopathy.

The type of study performed was called a randomized–controlled trial, in which 28 patients with a history of cervical radiculopathy for at least 3 months were randomly assigned to either the experimental group or the comparison group. Patients in the experimental group underwent an individualized cervical mobilization technique that consisted of posterior–anterior or lateral vertebral glides. Both techniques involved a physical therapist applying pressure at grade 3 to different areas of the cervical spine for 3 sets of 1 or 2 minutes. For patients in the comparison group, the therapist applied a minimal amount of pressure to the most pain region of the cervical spine for 3 sets of 2 minutes.

All patients were also instructed to perform strengthening exercises for the deep flexor muscles and participated in an educational session about pain and the safety of manual therapy and exercises. Patients were assessed before treatment began, 5 minutes after the first session, and then 5 minutes after the sixth session for several outcome measures, including the hypersensitivity for pressure and thresholds thermal—or heat/cold–related—pain.

These findings suggest that cervical mobilization techniques can lead to various benefits for patients with cervical radiculopathy, which could translate to better functionality and quality of life. Additional research is needed to confirm these findings, but patients with cervical radiculopathy should strongly consider seeing a physical therapist for a personalized program that will likely include some manual therapy component.

In our next and final post, we review another study on the benefits of physical therapy for chronic neck pain.

The information in the articles, posts, and newsfeed is intended for informational and educational purposes only and in no way should be taken to be the provision or practice of physical therapy, medical, or professional healthcare advice or services. The information should not be considered complete or exhaustive and should not be used for diagnostic or treatment purposes without first consulting with your physical therapist, occupational therapist, physician or other healthcare provider. The owners of this website accept no responsibility for the misuse of information contained within this website.